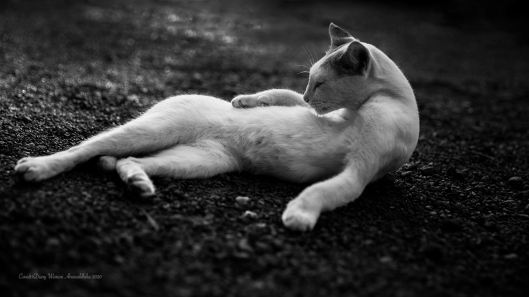 In this lonely evening I stepped down to the apartment garden, just to capture some images and visual outside from the   apartment wall. There were few vehicles and a few people on the road as usual due to the curfew. I placed my camera on the apartment wall adjoined to the railway line and rolled it.  After a while I heard a person was shouting loudly from a distance, then I saw one person is walking towards the junction where my apartment is. He was selling raw jackfruit. I got so exhausted after filming this poor person who was trying to sell two the remaining raw Jackfruit   bags. He was shouting loudly   and walking all the way on the road and trying to find a buyer to sell two last raw jackfruit bags before the sun goes down. Most of the daily wage labors and people earn a living doing many odd jobs on daily basis put in to a trap of COVID19 and poverty both due to lack of support from the government. These people do not think twice to risking their lives and earn a little money to feed their family members since there’s no other option. When he reached closer to the apartment gate he met up with another delivery van. The vehicle stopped right in front of me on the other side of the road.   It seems the driver wanted to buy the stuff. The seller reached up to the vehicle shutter and start a conversation, it was bit long conversation, definitely not bargaining but seems to be the driver wanted to find more about something else. Both of them were wearing face masks, time to time the diver put down his face mask and two of them were not maintaining a social distancing at all. After the conversation the driver seems to have an interest to buy the raw jackfruit bags.  Then he opened one of bag of it, checked it, it seems that he was unhappy to buy it. Then the seller opened the other bag, and took out one piece of it, removed the face mask and bite it and show it to the diver. He wanted to prove that the   raw jackfruit is well seasoned. But the vehicle driver refuses to buy it. The seller put the piece that he demonstrated in to the same bag and tied it back. where the face mask again and came to the other side of the road keep continue shouting loudly to find a buyer.  My camera was still rolling and some gloomy and smoky clouds were passing by truing in to more and more gray and while pearl was sniffing around my legs. It seems she needed to have a little cuddle. And I petted her, quickly she needed to have her own time. I let her to go … she was rolling in the floor in the evening sunshine and relaxing. I took some photos of her …. I was bit relaxing after all …   glad that I  am always being blessed to have a feline companion to accompanying   with me.  However, I couldn’t stop my thoughts running with the person who was struggling to sell the jackfruit.  His voice was vibrating in my ears yet ….